Noteworthy - Philabundance In The News - May 2019

At Philabundance, May brought an exciting new development that will usher in major growth for the organization, and also led us into the ninth year of Phans Feeding Families day with the Philadelphia Phillies and Citizens Bank.

The following press coverage raised awareness of our mission, our partners and the fight against hunger: One small scoop of earth will lead to a major expansion of the community impact and educational capabilities of Philabundance Community Kitchen (PCK), our culinary- and life-skills training program. On May 6, we broke ground on a new, 18,800-square-foot facility for PCK, which has outgrown its current home in a city shelter. At present, PCK serves between 80 to 100 students each year, and provides 250,000 meals for those in need in the community. In the new facility, at 2224 North 10th Street, PCK will train more students and quadruple the number of meals staff and students produce for the community. Not only that, but the new PCK building will transform a vacant lot into a community space. 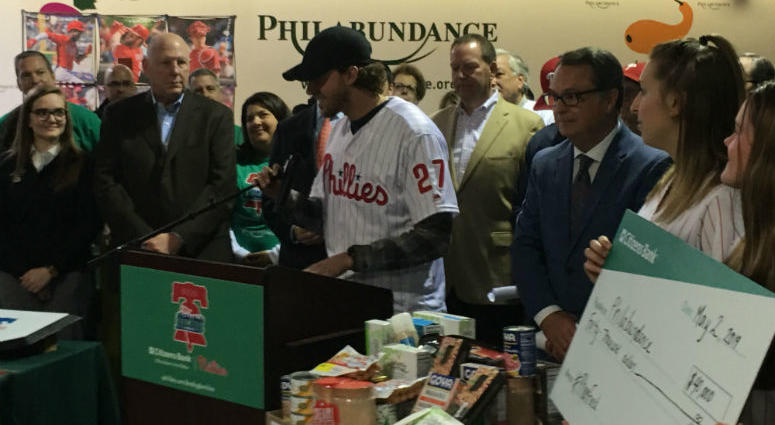 For nine years, along with Citizens Bank, the Phillies have been big hitters in the fight against hunger; we teamed up again for the annual hunger-fighting initiative Phans Feeding Families. This year, Phillies pitcher Aaron Nola was our ambassador and helped strike out hunger at the June 8 game. Phans has given over 1 million meals to families in need since its rookie season. Each summer, approximately 400,000 children in our area don’t know where their next meal will come from throughout summer break, when they lose their school meals. Each year, Phans helps feed them and raises awareness of the hunger crisis in our area.

South Philadelphia BYOB Musi earned a favorable review from The Philadelphia Inquirer’s Craig LaBan last month. Some of his compliments to the chef mentioned the restaurant’s spin on a cheesesteak, a local staple that Musi tops with cheddar from Philabundance’s Abundantly Good retail brand.

The brand’s upcycled foods helps those we serve AND the environment. Abundantly Good cheese sales go to providing free cheese to people facing hunger AND rescue food that would otherwise go to waste.

Noteworthy - Philabundance In The News - March 2019